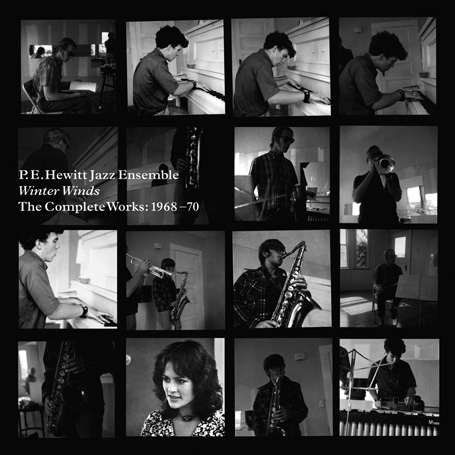 We’re pre-releasing P.E. Hewitt Winter Winds The Complete Works: 1968-70. The anthology is out worldwide in all formats on April 6th.

P.E. Hewitt’s was but 16 years old when he recorded and released – in a press of 50 copies – his debut album Jawbones. By the time he sold through the 100 copies of this third, Winter Winds, he was approaching the ripe-age of 20. The three albums he and his young compatriots wrote, recorded, pressed and – if you can call it that – distributed, are three of the rarest damn-good 70s jazz albums you could ever hope to come across. That’s a subtle, but important distinction. There are many rare jazz albums in every imaginable subgenre – funk, free, fusion… But Hewitt’s three albums were so damn-good that neither micro presses nor forty years of silence could suppress their reemergence.

We decided against compiling a “best of” anthology out of respect for Hewitt’s monstrous achievements and because, well, these albums are so damn-good. Instead, on offer is a three album hard-box set with directly reissues of the albums in thick “tip on” sleeves. CD box set mimics the vinyl format, but with CDs packaged as “mini LPs” in the hard box. Also included is an extensive booklet which includes the original liner notes from the albums, an essay on Hewitt and his career, a thorough interview with Hewitt by Egon and Groove Merchant “Cool” Chris Veltri, and never before seen photos.