The stories of great high school funk bands, once the realm of the deepest-pocketed record collecting obsessives, are, thanks to an abundance of reissues, commonplace. Columbus, Ohio’s Fabulous Originals’ “It Ain’t Fair, But It’s Fun” is one of Deep Funk’s standing classics; newly discovered recordings have further entrenched the band’s stellar reputation. The Detroit Sex Machines’ four sides, recorded under their father’s watchful eye as the then-teenage Dudley brothers attended Detroit’s Southeastern High School are of JBs quality. And the late Conrad O. Johnson’s inimitable Kashmere Stage Band, the subject of the Texas Thundersoul anthology on this label, offered, in this fan’s opinion, some of the best ensemble funk music recorded by any band, professional or otherwise, then or now.

If this is categorized as a “funk” album – and it was for the last ten years, by those few lucky enough to own an original copy – it holds its own. The band’s stage-band styled “Cisco-Fare” and “Santana” instrumentals are competent exercises in uptempo funk. But it was as a soul band – one as inspired by the melancholic musings of Bill Withers as the psychedelic-pop of the self-proclaimed “Black Moses,” Issac Hayes – that the Equatics shone. These young souls offered world-weary, beat-heavy ballads that stand on par with any of the great independent organizations of the early 1970s. That a group of teenagers could offer such an angst-ridden plea as that of Leo Davis’s “Merry Go Round” not only transcends the limitations that came from the band’s average age (seventeen, at the time of the album’s recording), but also the barriers the stood in front of this group of small-city hopefuls.

The Equatics leader and founder, bass player Benjamin Crawford, was born in Richmond, Virginia in 1953. His family moved to Hampton, Virginia when the young man was but five years old; the Crawfords settled on the 600-block of Pennsylvania Avenue, in what is known as Garden City in the Wythe area of the city. It was a fortuitous location for a young man who, as Crawford recalls, “taught myself to play the guitar sitting on the porch:” his neighborhood was teeming with young soul fans eager to play. He assembled the nucleus The Equatics from local youngsters. “Calvin Billups lived one street over. Wayne Jones lived two blocks over, Alvin Paige stayed about a mile away, Casper, a slide trombonist, lived two blocks beneath me on Pennsylvania Avenue,” he states. His wasn’t the only local band taken by soul and funk. “We jammed with Jade, sometimes,” he remembers, referring to the cult-famous organization that cut 45s and an album on entrepreneur Joe Riley’s Pesante label. “They lived about five blocks away from me.”

As Crawford grew, so did his young fingers. “My mother had sent me to a guitar teacher, and I was learning,” he now states. “But I moved to the bass, even though it was more difficult to play. My fingers were just too big for the guitar.” At the same time he was developing his physique (at the age of sixteen he stood better than six feet, one inch; he weighed in at over two-hundred pounds) as first-defensive tackle with the Hampton High School Crabbers under the direction of line-coach Frank Johnson, then an “older” man in his late twenties.

“Back then, we rehearsed in the house behind my house: it was a sixty by twenty five foot house, with central heating and all that,” Crawford recalls. “My mother and father were, I guess you’d call them, ‘well off’ at the time. My father was the biggest African-American cement contractor in the Peninsula. My mother owned a dry cleaning business.” The band that became The Equatics studied a combination of soul, funk and rock. For a time, the band had a white drummer more suited to rock than soul, which worked for Crawford, who recalls his bass-playing heroes from the era as the psychedelic Bootsy Collins, then with the JBs, and Rick Wakeman, from progressive-rockers Yes.

“I remember when I heard Funkadelic and Mother’s Finest. I thought, ‘This is my calling. I’ll create music that moves like this,’” Crawford states. “I loved the syncopation and the overlay of the various instruments.” As a result, his band was as likely to perform songs by James Brown as by Edgar Winters at talent shows hosted at Hampton High School – one of the first integrated schools in the United States – where The Equatics were often one of the only black bands on the bill. “Man, ‘Frankenstein,’ by Edgar Winters – we played the hell out of that!” Crawford exclaims. “We played rock – we just about played everything.” Echoing the stage-band mantra he adds, “If it was popular, we played it. Our own version of it, of course.”

The Equatics had plenty of local influences. Crawford recalls The Jessie Powers Band, Soulfonics, Soul Pride, the ensemble that would later become Washington DC’s Trouble Funk and “Little” Joe and the Everyday People as specific inspiration. A promo he heard on Little Joe’s radio show on the local black radio station WRAP informed him of a chance to break his band: Pepsi’s “New Sounds of 1972” contest. The rules were simple: any band interested in competing for a chance to create a for-the-airwaves Pepsi jingle had but to submit a recording of their demo and a photo of the band. Crawford talked his fellow band members into creating a thirty-second piece for the contest and he submitted along with a photo taken on the stage at Hampton High School. Out of more than three thousand submissions, The Equatics’ spot – which they titled “There’s A Whole New Way Of Living” – made it to the cola-company’s top ten. The Equatics soon found themselves in a recording studio in an industrial section of Norfolk where they produced their own, polished Pepsi commercial.

Shortly thereafter, Crawford heard his band’s jingle on radio stations across the state. According to Crawford, Pepsi created a secondary contest to capitalize on the popularity of the home-spun spots. Bottles of Pepsi came packaged with the chance to win prizes if a qualifying bottle cap was submitted to Pepsi with a vote for one’s favorite band. The band with the most votes would be given the opportunity to record and release a Pepsi-financed album. From what Crawford recalls, The Equatics waged a successful local campaign and “somehow, we won. Pepsi notified us and we said ‘this can’t be for real.’” Still, the ensemble dutifully assembled an album’s worth of original and cover songs on a Saturday and traveled to Richmond to record Doin’ It!!!! on a Sunday.

By this point in the Equatics’ trajectory, Crawford – mindful of the attention afforded his band and nervous about his inability to navigate the murky waters of the local record business – entrusted the band’s managerial duties to his coach, Johnson. “I was just too young, I couldn’t deal with the adults,” Crawford states. “Coach Johnson had come to us after a talent show where we smoked everyone with ‘Get On The Good Foot,’ ‘Family Affair,’ ‘Super Bad.’” Johnson’s influence was a mixed blessing: though the adult chaperoned the Equatics through the Hampton nightclub scene and allowed the burgeoning ensemble to cut their teeth at live gigs three to four times a week he also insisted on a particular vision for the band.

“Coach Johnson didn’t like ‘rock music’, he thought it was too destructive,” Johnson recalls. “And, through our band, he was living out his childhood dream of being a singer.” Johnson supplanted the band’s original drummer, Wayne Jones, with Alvin Paige, from Hampton High’s marching band; he moved Jones to organ. And, according to Crawford, he forced the band’s guitarist, John Wynns, into exile and replaced him with Carlton Savage, then a student at Thorpe High School. To Crawford, the changes – though temporarily jarring to this band of loyal friends – were musically justified. “Wayne and John weren’t strong enough for the material we wanted to record,” he laments. “Though Coach Johnson was the catalyst, it was we as a band who decided that they should be replaced on their instruments for the album’s session.”

Though Johnson exerted enough influence on the band to request that the band learn “Ain’t No Sunshine” and an original (his pleading “Where Is Love”) so that he could fulfill his destiny as a soul singer (in this writer’s opinion, he succeeded), the band’s remaining originals were assembled democratically. Each band member suggested ideas that, if decided upon, were fleshed out through group effort. “For instance, Carlton put together ‘Cisco Fare,’ ” Crawford recalls. “He put together that guitar part, we liked it, and we came around him and worked it out. That was our philosophy – we took everyone’s talents and used them to strengthen our songs.” “Merry Go Round” first came to the band as lyrics scribbled by Davis on a napkin. Savage and Crawford composed a mournful melody and Paige embellished with a tight sixteenth note reminiscent of James Gadson’s groove on Withers’ original “Ain’t No Sunshine.” Collectively, the band’s three horn players arranged themselves and “Merry Go Round” quickly coalesced as a sparse, pensive ballad – largely due to the fact that they had little time to rehearse. “We literally rehearsed the new material for our album in three hours,” Crawford states in wonderment. “We certainly had one thing going for us: raw talent.”

The album came together quickly – Crawford recalls creating the cover imagery for the Doin’ It!!!! but never bothering to name the imprint that Pepsi funded to release the band’s magnum opus. He smarts when he recalls seeing finished product that listed his Coach’s name listed as bandleader, producer and director. “That was my band: I was the leader, I made the final decision regarding the music we would play and record, I was in charge of our sound down to the places that the band members set up their amplifiers,” Crawford argues. “Imagine my surprise when I saw the final version of our album.”

Though Crawford recalls that Pepsi distributed Doin’ It!!!! worldwide, it’s doubtful that more than a few hundred copies of the album were manufactured and, if copies were distributed outside of the halls of Hampton High School, they were almost surely distributed locally. Differences between Crawford and Johnson continued to build – organist Jones quit the band and, although Crawford recalls recording contracts coming his way, he decided against pursuing them. “I knew too many of my friends to leave school to pursue their dreams without an education and, man, they were screwed when their dreams went up in smoke,” Crawford opines. “I said ‘No, thanks, I’m going to stay in school.’” He entered the Air Force shortly after graduating Hampton High School in 1972 and The Equatics folded shortly thereafter. 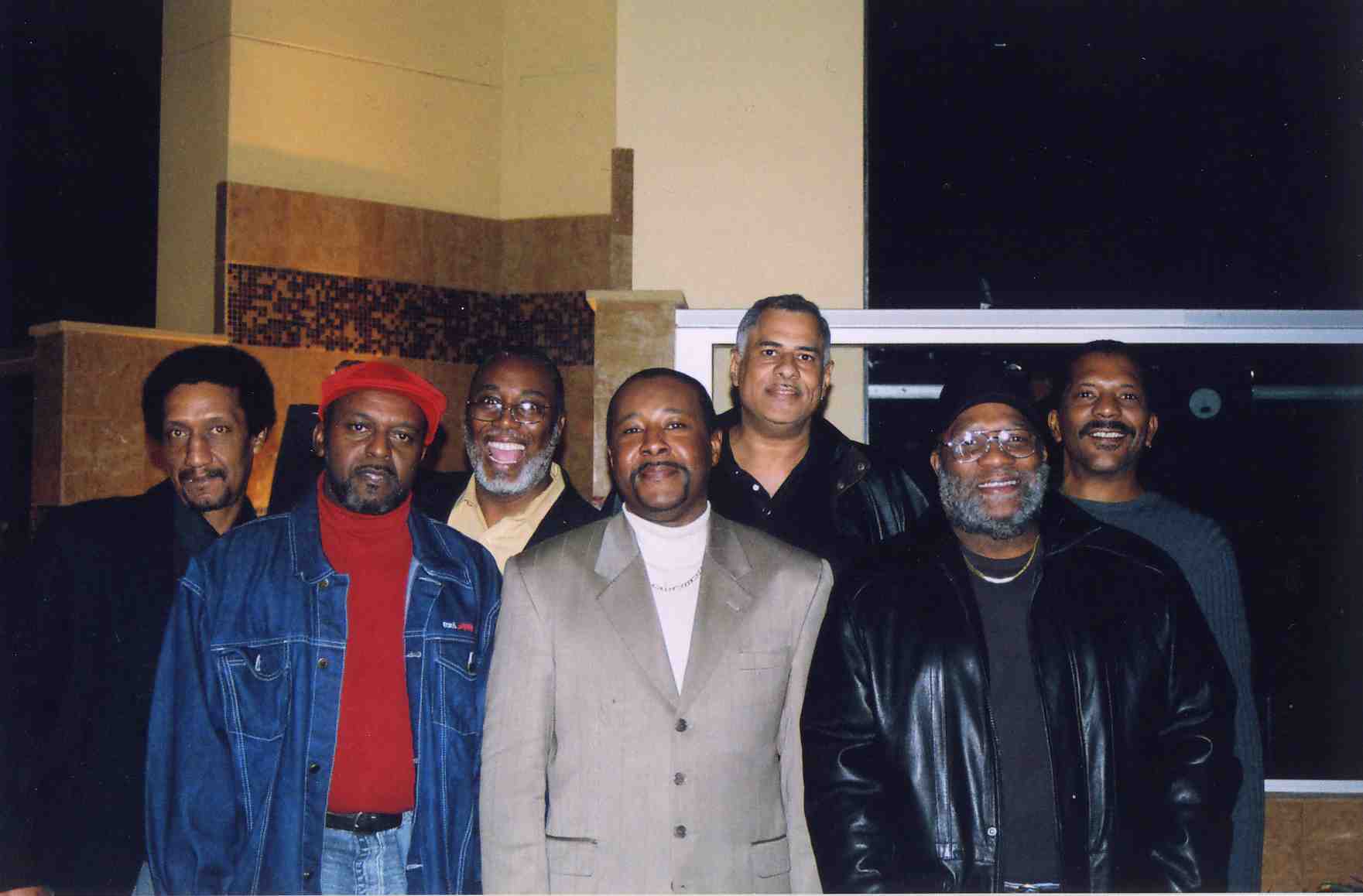 “But music made with love and with friends never dies,” Crawford offers. “In 2006, after I learned of renewed interest in our music, I gathered Calvin and his family, Renon, Buddy, Alvin, Wayne and Carlton at the Hampton Embassy Suites for what I though would be a re-release of our album.” It was a bittersweet experience. “Though myself, Alvin and Carlton had remained involved in music, many of the guys had decided on different paths. We couldn’t find Leo. Coach Johnson had passed away.”

Still, the magic captured in that moment during which the members of The Equatics went from the ranks of Hampton’s hundreds of soulful hopefuls dutifully belting out cover-tunes on their high school auditorium’s stage to the status of bona-fide recording artists – if not “stars” – capable of offering up their own take on soul music, remains. Doin’ It!!!! was captured and preserved on wax under what strikes this writer as nearly unbelievable circumstances. Against the odds, The Equatics recorded, pressed and preserved a soulful cry from a now legendary era. It has survived to, in words cribbed from their original liner notes, “tell it like it is, in life and love.”