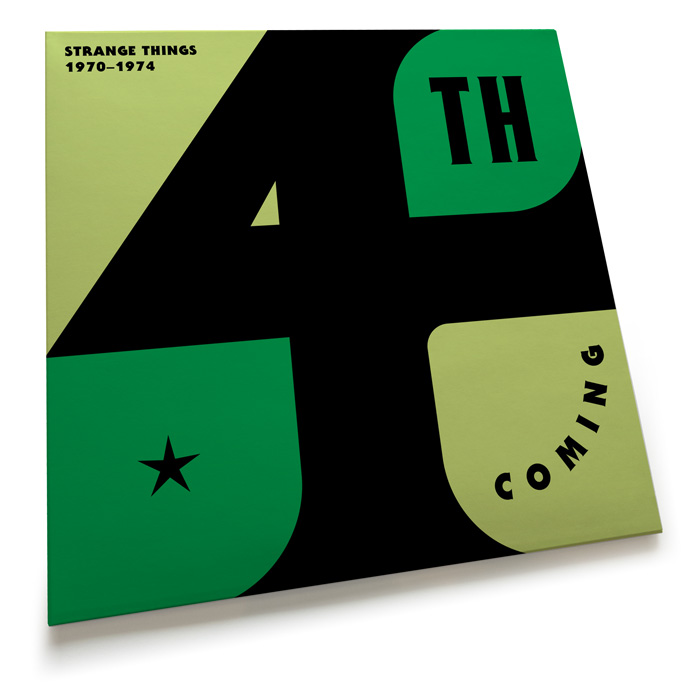 Buy it via our webstore at Rappcats.

They had a catchy, but inappropriate name: there is nothing forthcoming about Los Angeles’ 4th Coming, unless one counts a copious amount of releases – on rare 7” singles – that didn’t sell farther than vocalist/principal Henry “Hank” Porter’s Datsun 1200 could take him. When 4th Coming records surfaced, they were often disregarded as novelty, for in the ‘90s, few besides 4th Coming fan DJ Shadow cared for the intriguing synth-funk of “The Dead Don’t Die Alive.” And some of their records were so rare that it took until the late ‘00s for them to reemerge, after the sinking of their initial pressing runs. Assembling a near set of 4th Coming recordings was nearly possible, until the issue of this, the lost 4th Coming album: Strange Things, The Complete Works 1970-1974.

At its core, the 4th Coming was a songwriting duo – Porter and Jechonias “Jack” S. Williams – and a rotating cast of musicians that Williams assembled at Artist Recording Studio to realize the pair’s ideas. They existed only from the latter half of 1969 until 1974; during that time they issued eight singles as 4th Coming and one as Impact!

So those four years – which coincided with the rise to international fame of Los Angeles funk ensembles like Charles Wright and soul singers like Bill Withers – must have seemed like a great time for Williams to record and release singles, in an attempt stitch his thread into the rope carrying LA’s progressive black musicians above the smog. Williams found an unlikely allegiance with Al Furth, Furth’s Artist Recording Studio and his Alpha label.

And now, Strange Things, a a thrilling listen, a mysterious trove of recordings made possible by an open minded and well-funded indie impresario – Furth – which document a very real and very weird Los Angeles of the past. It’s a city we’ll never know again, and one that might never again produce an ensemble like the 4th Coming. If Furth’s faith only rolled snake-eyes in terms of commercial success, in terms of documenting Los Angeles’ vibrant soul and funk underground, he rolled boxcars. This, the album Williams and Furth always hoped would bring them real success, now sees its complete release and allows us to ponder the might-have and the would-have beens – had a 4th Coming album come together in the mid-‘70s.