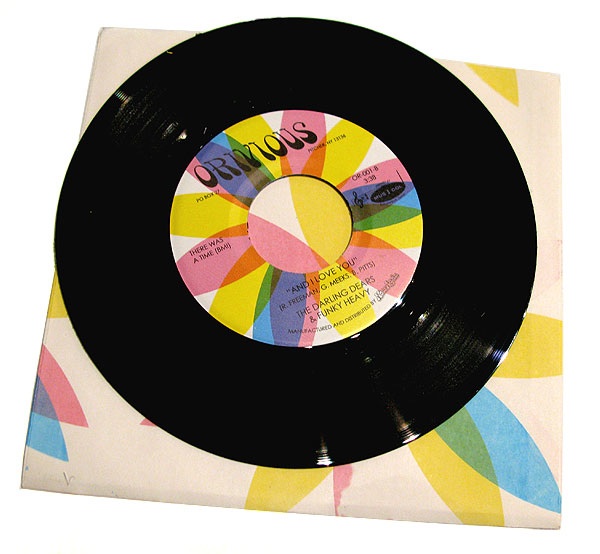 Now-Again is happy to announce the inaugural release on Orivious Records: the official, from-the-master-tapes issue of the most sought after sweet-funk single ever recorded! Out now.

Now-Again launches New York funk/soul researcher and archivist David Griffith’s Orivious Records with a masterpiece: the sole document of a lost and unlikely teenage “sweet-funk” collaboration between Rochester, NY vocalists The Darling Dears and backing band Funky Heavy. Originally issued in 1972, the record never made it beyond city’s west side. Today, this rare and exquisite blend of fragile female harmony atop an unexpected bed of raw, plodding funk commands four figures at auction when it appears in its original form.

Tracking the band and finding their assumed-lost master tapes took Griffiths the better part of seven years. In recognition of this Herculean task, we’ve spared no cost in assembly: the masters were officially licensed from the band; lacquers were cut directly from the original master tape by vet John Hull at his historic Musicol in Columbus, Ohio; test press after test press were rejected until near-perfect sound quality was achieved.

A limited variation – 100 numbered, hand made silk-screened picture sleeves – will be made available for a while supplies last; more details to come soon. Both of the Darling Dears and Funky Heavy’s songs will appear on the forthcoming anthology Loving On The Flip Side, which is scheduled for release in mid 2012.