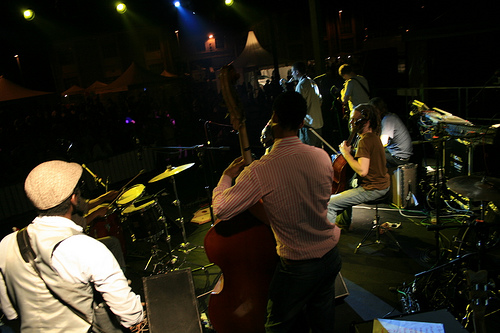 The Heliocentrics are a UK-based collective centered around drummer Malcolm Catto and bassist Jake Ferguson, both of whom produce and record the band’s singular music. Their debut album, Out There (2007) was a confounding piece of work. It drew from the funk universe of James Brown, the disorienting asymmetry of Sun Ra’s music, the cinematic scope of Ennio Morricone and the sublime fusion of David Axelrod. It pointed the way towards a brand new kind of psychedelia, the kind that could only come from many years of musical evolution, from never conforming long enough to any particular musical genre, from the melting pot of musique concrete, post punk, Krautrock and, of course, those other genres already mentioned.

The follow up to Out There, 13 Degrees of Reality (2013), found the Heliocentrics returning to develop their epic vision of psychedelic funk, while exploring the possibilities created by their Latin and African influences, among others. Their third Now-Again album The Last Transmission (2014) paired them with maverick filmmaker, musician, songwriter, vocalist and activist Melvin Van Peebles, in something resembling an intergalactic “Rime of the Ancient Mariner.”

The bands collective drive is to find an individual voice, and they search for it in an alternate galaxy where the orbits of funk, jazz, psychedelic, electronic, avant-garde and “ethnic” music all revolve around “The One.” While Catto and Ferguson are the two only constants in the ensemble, Nigerian guitarist Ade Owusu is the irregular but important third. They are equal parts musicians and music fans and they have been playing together for over a decade: the Heliocentrics have realized that their strongest statements are made somewhere amongst the persistent fuzz of Owusu’s distorted guitar, Catto’s impossible syncopation and Ferguson’s loping bass lines.

They have earned lifetime fans in the likes of Madlib (with whom Catto has collaborated on numerous Yesterdays New Quintet projects), The Gaslamp Killer, DJ Shadow (both as a touring ensemble and in the studio), Quantic and Ethiopian jazz giant Mulatu Astatke, with whom the Heliocentrics recorded and released Inspiration Information 3, the fourth classic Mulatu album – released nearly forty years after his other three.