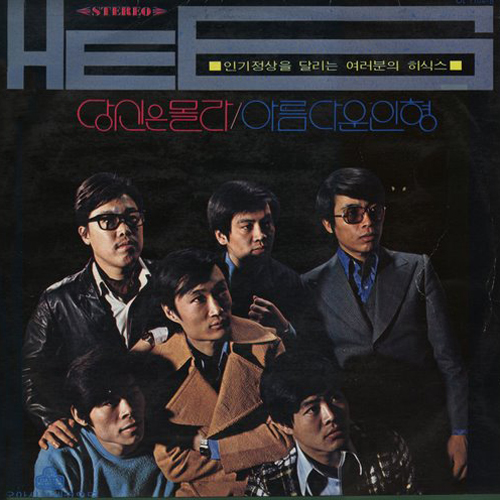 We told a bit of Seoul’s He 6’s story in a previous pick. Their earlier incarnation, the He 5, deserves note for producing the most fuzzed out Christmas album in a country that’s famous for such novelties. But the psychedelic-funk heads are more into the band as a sextet, and for good reason. Their first two albums as the He 6 contain some gorgeous psychedelia, subtly funky, and accompanied by soaring choruses. Their sought after Go Go Sound ’71 albums are amongst the rarest in all of Korea and, as instrumentals, are easy on Western ears not attuned to the nuances of Korean singing.

This album, released after their second Go Go Sound album, is the album that turned me on to Korean psych. To give credit where it’s due, a certain Bay-Area producer sampled a track from this album in the mid 90s, a friend who was in the studio mentioned this “insane Korean record” to me, and, some years later I heard from yet another producer, in one of those “six degrees of separation” moments, that he had found a reissue of the album in Australia, where one of the band?s original members transplanted himself sometime after the He 6 took on disco and (happily) disbanded.

So I’m no pioneer at this, just one idiot in the line of many, buying any wild looking Korean record for way too much money only to find out that “Go Go” could mean “sounds like Peggy Lee” as easily as it could mean “sounds like Cream,” and only to find out that most collectors in Seoul took lessons from their counterparts in Addis Ababa as to how to care for their vinyl.

All of that is worth it, of course, with one listen to this epic cover of the Rare Earth’s “Get Ready.” At once an excuse to stretch out into the outer realms of commercial accessibility and a lesson in restraint introduced by a deep study of funk (or funk-influenced rock, as it were), this fourteen minute jam builds momentously from start to finish.