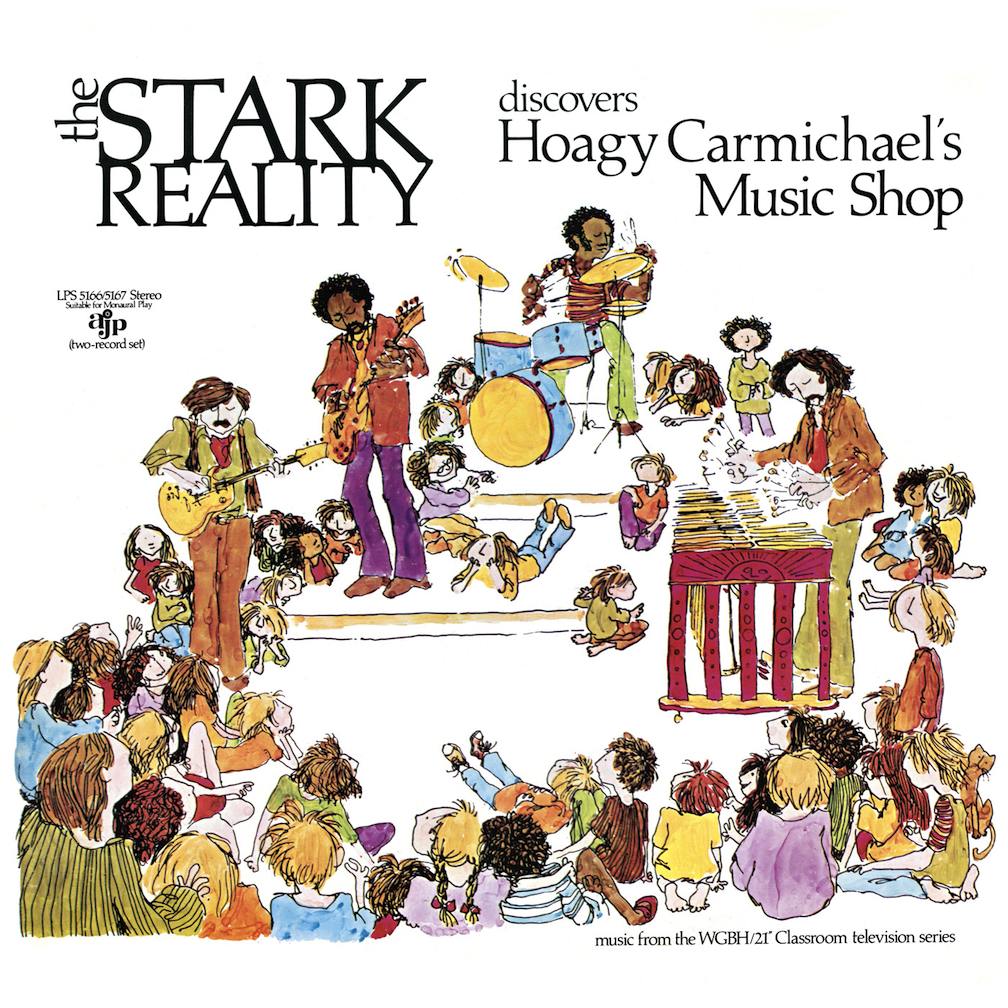 This is the definitive reissue of The Stark Reality’s Discovers The Hoagy Carmichael’s Music Shop (1970), lacquered by Bernie Grundman in an all-analog transfer directly from the master tapes

The story of this album begins in Boston the late 1960s, with a wild jazz band landing a deal with Ahmad Jamal’s nascent AJP imprint after the jazz pianist heard their demo recordings. Bandleader Monty Stark had been tasked by the great American songsmith Hoagy Carmichael’s son, Hoagy Bix Carmichael, to create interpretations of the elder Carmichael’s children songs for a Mr. Rogers-themed show that the younger Carmichael was producing for local PBS affiliate WGBH.

The quartet – Stark on vibes, Phil Morrison on bass, Vinnie Johnson on drums and a very young John Abercrombie on fuzz guitar – recorded an album that flopped upon its initial release and went on to become, “one of the most prized ‘funk’ artifacts of all time … a project that allies Hendrix-stoned guitars, heavily-fuzzed vibraphone and Bitches Brew rhythms…” (Mojo Magazine).

Egon first tracked down Stark Reality bassist Morrison when he was in college in the late 1990s, when the only way to hear this album was to be lucky enough to find someone willing to sell you an original copy for what was the the astronomical sum of $500. By the time he moved out to LA to run Stones Throw Records in 2000, he’d found Monty Stark, and by 2002 he’d gotten in touch with every member of the Stark Reality and their entourage.

This led to the first reissue of the band’s material – an anthology, Now, drawing from this album, and their unreleased demo album that landed them their deal with Jamal. Later, on Now-Again, Egon issued the entirety of their debut as a 3LP and the demo as 1969. Finally, he assembled the definitive Stark Reality box set, Acting, Thinking, Feeling, which included all of their recordings.

This is the first time that the band’s legendary album has been presented as an archival reissue, in a replica of its original gatefold package, and with an all-analog transfer done by Bernie Grundman from the master tapes. An incomplete set of tapes sold on eBay to an unknown collector circa 2017, and the only complete set of tapes was maintained by the band’s photographer, Jim Bourne, who made them available for this special project. This version of the album also contains an oversized booklet with Egon’s liner notes.