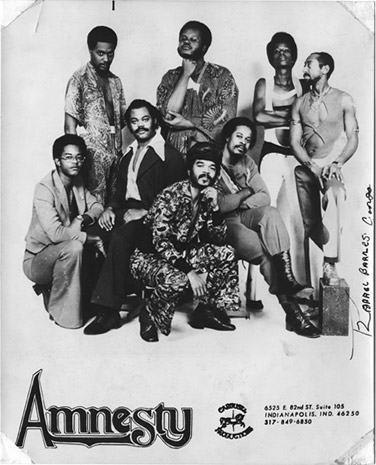 Fans of the exquisite, often never-before-released funk championed by Now Again Records are no stranger to Amnesty. Based in Indianapolis in the early 1970s, the group released only two obscure 45s in their recording career. Birthed from the same scene as the Ebony Rhythm Band (Soul Heart Transplant – NA 5011), Amnesty had a poltical edge similar to LA Carnival (Would Like To Pose A Question – NA 5009) and the hardest brass section since The Kashmere Stage Band (Texas Thunder Soul – NA 5023).

This previously unreleased anthology comes from the same sessions as “Free Your Mind”. In 1973 Amnesty recorded five hard, vocal funk numbers alongside some ballads and a handful of demos based around nothing more than guitar accompaniment. Only two songs were ever released; Amnesty’s biting, difficult-to-categorize prog/rock/soul/funk stretched far beyond Indianpolis’s bounds and the band didn’t have a label to take them to the next level.

Obviously influenced by, but by no means simply imitators of, the sound of early Parliament and Funkadelic, Amnesty also responds to the grooves of Earth Wind and Fire and Sly and The Family Stone in their own way. Finally made available thirty three years after they were recorded, these songs are funk arranged with dangerous complexity and performed with precision – arguably the most unique funk to originate from Naptown, and some of the best music of its kind.