To answer the question – YES, there was rock music in 70s Zimbabwe. And it sounded like this:

Just as the hippie era came to an end in America, a second sixties was beginning. In what is now Zimbabwe, young people created a rock and roll counterculture that drew inspiration from hippie ideals and the sounds of Hendrix and Deep Purple. The electrifying music they made was nearly lost to history. They called it “heavy,” and a few listens to the above linked track will tell you why.

The heavy rock scene has been almost forgotten, even in Zimbabwe. We at Now-Again are reissuing their work for the first time since its was initially released in small runs of seven inch singles, and for the first time ever outside of Southern Africa. The music was brought to light by the combined efforts of researcher Matthew Shechmeister and Albert Nyathi, a celebrated Zimbabwean poet and musician.

When these songs were recorded, Zimbabwe was known as Rhodesia, a former British colony that broke from the Empire to preserve white rule. In the mid-70s, Zimbabwe’s War of Independence began in earnest. Pro-democracy parties grew in strength, and their armed wings battled the Rhodesian military from bases in neighboring Zambia and Mozambique. Guerilla units infiltrated Rhodesian territory, and along with thousands of demonstrators, engaged the security forces with increasing boldness. In urban townships, young people picked up where the Band of Gypsies left off, creating their own brand of politically-charged rock and roll.

Dozens of groups, primarily from black townships, brought together tens of thousands of young progressives of all backgrounds. They created their own Woodstock, an event that made national headlines and stomped on racial taboos, uniting fans from all of Rhodesia’s ethnic and racial communities. Bands in the scene gigged furiously, playing all-night shows in the townships, flouting police curfews. Fans grappled with cops that tried to enforce the rules, and some rock shows turned into all-out battles with the riot squad. Rockers were beaten, tear-gassed, arrested, and mauled by police dogs. But they kept coming back, night after night, packing venues across Rhodesia.

Though primarily driven by live shows, many of the scene’s leading lights did make it onto vinyl. The band Eye Q got the attention of local labels with its smash hit “Please the Nation,” a political song that snuck by the censors and became a hot-selling single. The band Wells Fargo was also at the forefront of the scene, and the title track of their album Watch Out! was the anthem of the counterculture. Though a bank might seem like a strange namesake for a revolutionary rock group, the founder thought he was borrowing the words from a work of fiction. He had seen them in a cowboy comic book, and liked the association with the lawless frontier. The song “Watch Out,” originally titled “Have Gun Will Travel,” urged young progressives to head to the borders, which the liberation forces had turned into lawless frontiers of a different sort.

But when the War of Independence was won in 1980, the frontier was gone, and outlaw rock and roll felt out of date. Though the majority of heavy rock music had not been political, the scene was bound up with a social rebellion against racial and ethnic divisions. After the white minority was out of power, segregation laws were repealed, and that rebel cause also lost its urgency. And even when rock was at its peak, many leading musicians focused on creating a renaissance of African culture, which had been marginalized during a century of white rule. Chimurenga, which became Zimbabwe’s dominant musical style, takes its name from the Shona word for “revolutionary struggle.” The genre is based on the traditional music of Zimbabwe, but is played on electric instruments and a modern drum kit. The arrangement is a lot like a rock group, and the genre’s most famous figure got his start as rock guitarist. Nonetheless, the heavy rock sound is long gone, though its message of optimism and courage remains timeless. And we will continue to give you reasons to investigate the scene further in this and coming years. 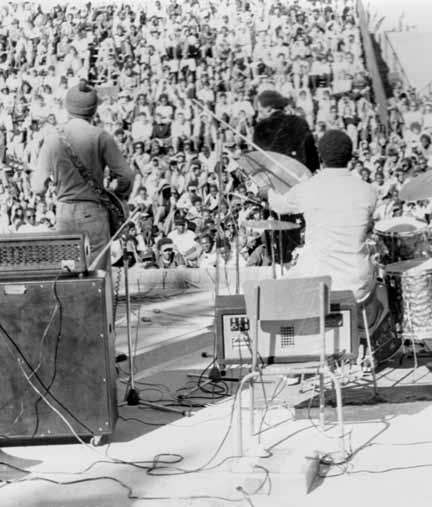