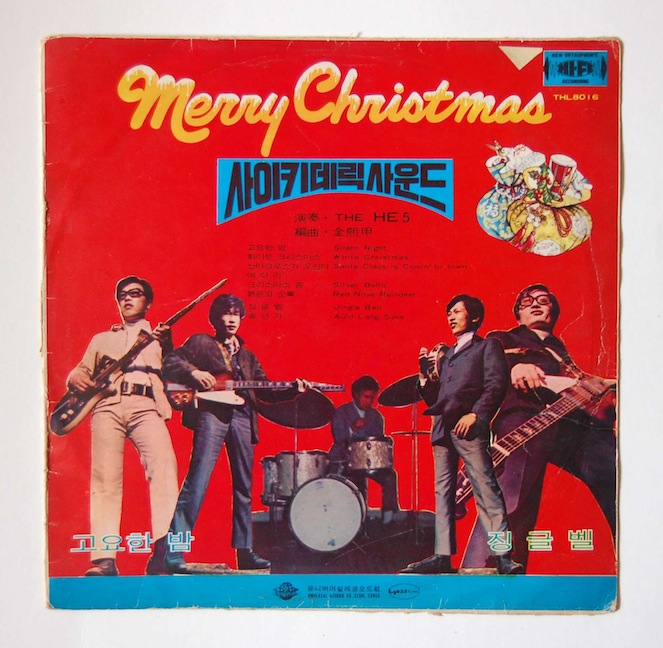 I can’t front. When it comes to Korean Christmas records, my man Cut Chemist has me beat. He returned from Seoul earlier this year with some insane Christmas Carol record that contained possibly the funkiest track I’ve ever heard on a Korean record (Though my man Jason up in Toronto has been hipping me to some that sound incredible in their own rights, I haven’t heard ‘em yet).

But I had to get up in the Christmas mix myself (I was getting tired of playing the James Brown Soulful Christmas album and David Axelrod’s Messiah around the folks’ place every December) so I bought the He 5’s Merry Christmas Psychedelic Sound for Xmas ‘07 rotation.

I do love the He 5’s later incarnation, the He 6. Their first three records under that name are amongst my favorite Korean “group sound” psychedelic albums, and their cover of the Rare Earth’s “Get Ready” is probably my favorite Korean track at this moment. But this record, seemingly their first (?) is quite the novelty: all Christmas songs (a la “Rudolph the Red Nosed Reindeer”), done in an instrumental, garagey psychedelic fashion, just “acceptable” enough for the ears of aging hippies to play at your parent’s house on Christmas morning… But their cover of “Jingle Bells” morphs, about a minute and a half into the track, into a ten minute freak out cover of “In A Gadda Da Vida” and, after the drum break, wails into “Paint It Black.” The returns to “Jingle Bells” again. Yikes.

Then, immediately after, the He 5 play “Auld Lang Syne” for about two minutes before they, in the words of my boy Cut, “go at it like Billy Ball” and introduce their band. In broken English. With a drum break to boot. I once read a Korean website review the record and say: “Last track is influenced by black music like from James Brown etc.. very ‘black’ and funky.” Uh, yeah. It makes no sense but they’re really going for it. I like this one almost as much as Shin Jung Hyun’s cover of “Funky Broadway” on his (what else) In A Gadda Da Vida album.