Lightmen Plus One – All Praises To Allah (Lightin’ Records, 1972) 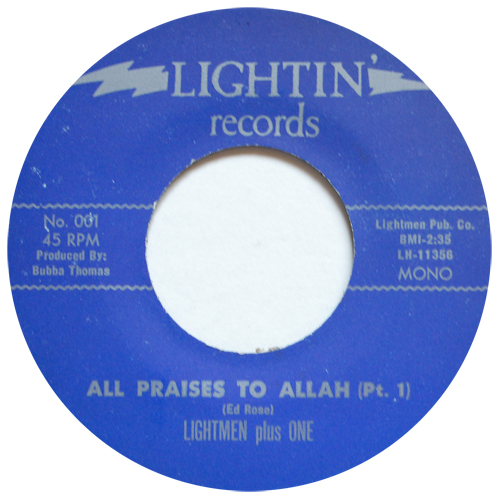 Listen: “All Praises To Allah.”

So, it’s officially cool for guys that were into funk (exclusively, mind you) to obsess over modal jazz. I vaguely recall the days when most funk collectors looked at those who collected modal jazz as they’d regard the poor sap caricatured as the lame, tweed-wearing “jazz guy” in Jerry Maguire who professed his love for In A Slient Way. Well, that is, besides the likes of Gerald Short, who always stood one step ahead of his peers and recently released an excellent comp of the stuff. It’s hard for the most hard-headed funk-nerd to scoff at Salah Ragab’s “Neveen,” so thanks G.

I knew something was up, then, when I got an early morning call from my English friend telling me about a heated auction that was about to end on eBay. At stake, “All Praises To Allah” by the Lightmen Plus One. “Isn’t that on one of the albums?” I inquired, before thumbing through my shelves in disbelief. No, indeed this song only ever saw release as a poorly-disributed 45 on Bubbha Thomas’s Lightin’ Label. Luckily, I’d found a couple copies back on my first trips through Texas, so I threw it on the turntable and was blown away.

What had I been thinking, when, after I first found this 45, I convinced myself I liked The Kashmere Stage Band’s funk cover (on their Zero Point LP) better? This track rocks! So here I stand, another one of those ex-funk snobs who now intersperses the likes of this song in his DJ sets. Well, at least I had the foresight to buy these records when no one else would pay five dollars for ’em. There’s some justice in that? Surely?