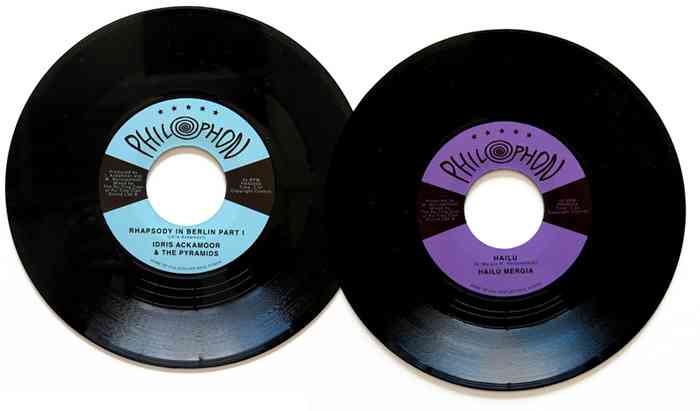 Ethiopian jazz/funk legend Hailu Mergia’s “Musical Silt” was one of the pinnacles of 70s Ethiopian music, a cornerstone in the Ethiopiques series and was recently reissued on its original album by Awesome Tapes From Africa. But it’s creator hasn’t released new music in thirty years – until now. This, his first set of new recordings in three decades, find that he hasn’t missed a beat since leaving the recording sphere. The pair of he and Philophon’s Max Whitefield (drums/producer) couldn’t be better and this 45 reflects Philophon’s overarching philosophy: to put on vinyl something precious that it makes you forget time and space and leaves you alone with the only thing that matters: awesome music. Buy here.

The Pyramids and their multi-instrumentalist leader Idris Ackamoor have revived the burning fire behind three lauded privately pressed 1970s albums and the movement that followed. The Pyramids’ honest love for music, their firm belief in its social impact have shaped their story and style: after studying with free-jazz icon Cecil Taylor, the Pyramids left for a journey through Africa in 1972 where they connected with their cultural roots and developed their own musical vision. On “Rhapsody in Berlin” their vision is still bright and unclouded: a melodic horn theme interplays with a Pygmy flute, driving guitar riffs and heavy funk rhythms. Co-produced by Ackamoor and drummer Max Whitefield. Buy here.

Roy X (ne Jimmy Taylor) is the youngest son of Ghanaian Highlife/Afrobeat legend Ebo Taylor. His inherited rhythm spills into his rapping and on this 7″ he raps over music created by Philophon label boss/producer Max Whitefield. On “Oduyewu” he pays respect to the timeless sound his father created; on “Sakawa” he meanders through dream-time, helped along by a Whitefield Brothers sample interwoven into the live music bed. Buy here.

Guy One, the most famous voice of the Frafra people in northern Ghana, is a super star among his people. He sings while playing the Kologo, an ancient two stringed banjo, mostly for traditional occasions. His words always have a strong meaning which gives him the attribute of a singing philosopher. For his Philophon debut, he teamed up with drummer/producer Max Weissenfeldt, to meld Max’s deep grooves with a haunting choir of Frafra soul. Buy here.