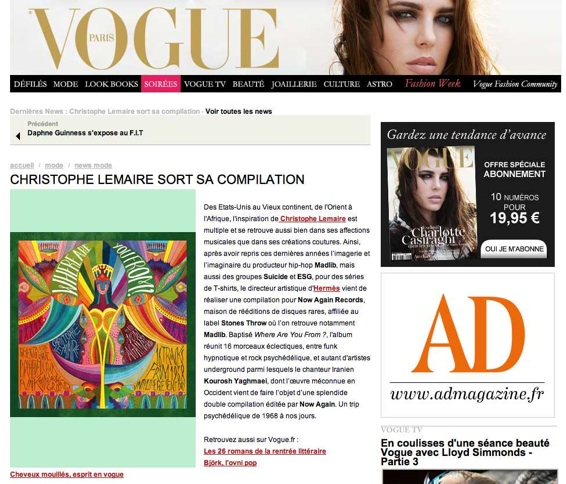 To say that Ludivine Grétéré is our French publicist would be like saying that Lee Anthony is a record label owner, or that Kourosh Yaghmaei is a guitarist: Sure, that would be a factual statement, but it would only tell part of the story.

Case in point… before the ink is dry on the tip-on sleeved, gatefold CD package for the forthcoming anthology that we’re presenting with French fashion designer (and all around music lover) Christophe Lemaire; before we can announce the anthology to our faithful, she somehow convinces Vogue France to post a story about it. I mean, we assumed that the French would take to an anthology subtitled “Christophe Lemaire and Now-Again Records present a series of global psychedelic rock, funk and folk grooves – 16 tracks from 1968 until the present day” – but the Vogue homepage? Damn!

So, if you read French, you’ll get a bit more information in the link below. And, if you don’t, we’ll make an announcement – in English – soon.

Read: Vogue France on Where Are You From?.