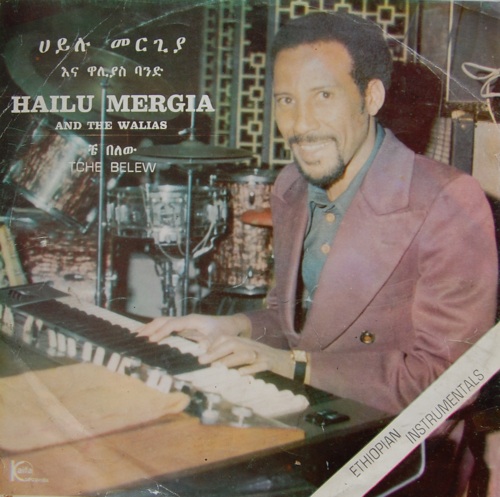 Though I’ve heard some late 70s cassettes that have blown my mind, I do believe that there are only three instrumental Ethiopian albums (that is: vinyl-only) recorded and released during what Francois Falcetto of the Ethiopiques series has termed “The Golden Seventies.” Two are by the ubiquitous Mulatu Astatke, and saw release on the Amha label. The first, Ethiopian Modern Instrumentals Hits, collected his 7″ releases on the label while the second, Ethio-Jazz from 1974, contained previously unreleased, long-form compositions. The third is the record you see here, credited to Hailu Mergia and The Band Wallias but owing much to Astatke (featured, naturally, on the instrument he introduced to Ethiopia – the vibraphone). It saw release on Ali Abdella Kaifa’s self-named label.

As Falcetto points out on his excellent liner notes to Ethiopiques Vol. 4, there was not much of an instrumental tradition in Ethiopia until the advent of brass bands in the early part of the 20th century. Thus it’s not surprising that outside of the adventurous Astatke very few people attempted to record and release instrumental music in the short period during which the Amha, Kaifa and Phillips released a few hundred 45s and a handful of LPs in the country.

Why this album contains only one song like “Musical Silt” is ponderous. The rest of the album is enjoyable, equally funky and benign. But “Musical Silt,” the only song from the album ever reissued, is a beast. While some might call it dissonant, it’s beautifully modal, a perfect example of the Ethiopian qenet system tempered by the tuning of the Western instruments the musicians play. And the rhythms; each component of the ensemble plays in their own time signature. “The one,” which most fans of funk music so readily anticipate in a rolling groove, never sounds exactly like you’d expect it. But the song chugs along perfectly – it ends some four minutes in, but you wish it would run for hours. A hypnotic groove fo’ sho’.

Thus, while the song owes much to Astatke’s influence, we can’t cease without giving respect to the arranger and pianist Girme Beyene, whose tenure with the band Wallias continued as the band left Ethiopia and toured the USA in the early 80s. This song is arguably his masterpiece, which says quite a lot considering the quality of musicians he produced during his time in Ethiopia (including the awesome Alehmayehu Eshete).