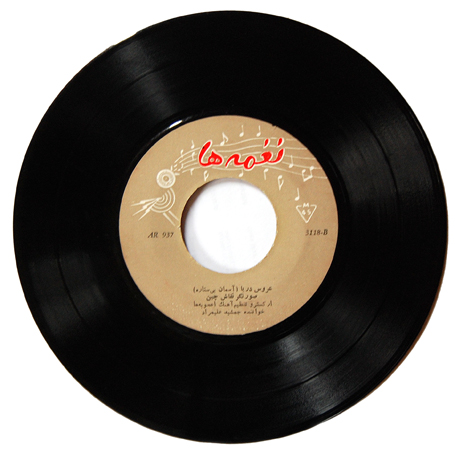 Every once in a while, we at Now-Again headquarters get an email that’s too hard to believe. Case in point, the homey Josh Marcy tells us he’s just stumbled upon a stash of Iranian 45s in the house his parents rent to an elderly Persian woman. By his estimation, there’s some heat in the stacks – not much psych, but a smattering of cool pop that he’s willing to share. A few weeks – and a pick up at Computer Jay’s studio – and there we are, wondering what the Ennio Morricone-sounding tune rolling off this Farsi-inscribed 45 could be. Well, we send the tracks to Dario at irannostalgia.com and he informs us that the record is by the group Ojoubeha. We look at our interview with Iranian legend Kourosh and find this gem:

“In Iran rock groups never used or mixed traditional or local instruments. They simply copied what was done in the West. The exception was the group Golden Ring who would write Iranian melodies and then would play them on rock instruments. They released some records like, “Ey Yar Bala.” (“Matador Come Back”.) Also the group Oujubeha, with lead singer Jamshid Alimorad who now lives in the U.S., performed songs like “Tour-Mahihaa” and “Shekar Ahoo.” “