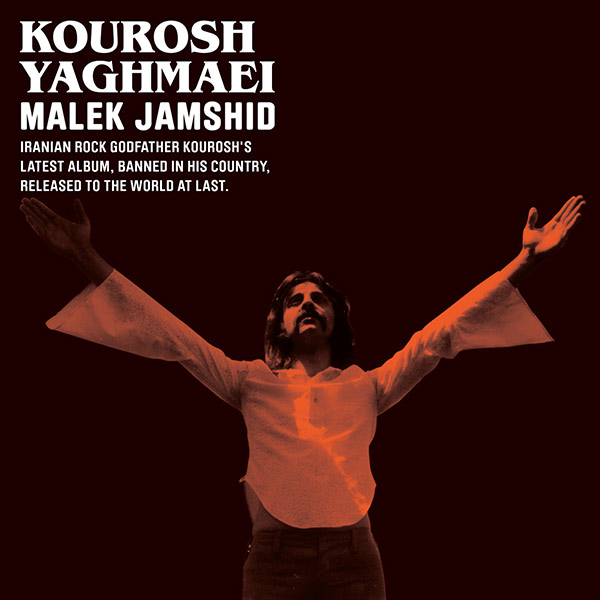 ON SALE AT OUR WEBSTORE AT RAPPCATS: KOUROSH YAGHMAEI – MALEK JAMSHID

Questions about the difficulties in and delay of releasing this album emphasize systematic censorship, cultural deletion and even cultural self-destruction, at a state level. They highlight the thoughts in the background of the media and a society hit by crisis, in which no voice of clear protest is heard in the world, not from human right organizations, let alone from the media inside Iran. No mention of this censorship, and torture on an artistic soul, along all social, technological and cultural transitions, in this current century, in a land where the world’s greatest [ancient] empire [in] Takhte Jamshid – The Gate of All Nations – or, as the Greeks called it, Persepolis was established 2500 ago.

It is impossible, in a few sentences, to explain the irreparable damages and the rubble of adversity that crumbled on me, my family and especially on my homeland in the past 37 years, with the occurrences of such cruelty – terrifying hell-like obstacles – that walking through them is not believable to others. This dark age of culture cannot be described in a few lines; there should be books written about it. Musicians were harassed and beaten in streets and their instruments were broken by boots. I, who was a leading popular artist in Iranian society, in just a few hours, was shown to be anti-culture, a perverted person. This was going on when my ability to earn any income for living expenses from my music was cut off. No light at the end of the tunnel. Iranian society was in awe watching all these horrific changes, in just a few hours.

People in Iran know me as the master, the pioneer and the king of modern and rock music, but to protest against this cultural deletion, this censorship, and the physical and mental tortures the government brings upon me, I am forced to decide not to release my works in my own homeland, for an unknown amount of time to come. This doesn’t mean I will stop working, and I will have a new album every a few years ready to present to my country.

In the end I must point that I only write these words to let the world know about this catastrophe, not to attract sympathy of others, which I hate. I believe in an unjust battle, to stand tall is better than to surrender.

In 2011, we released the anthology, Back From The Brink – Pre-Revolution Psychedelic Rock From Iran: 1973-1979. Here’s “Gole Yakh (Winter Sweet)” from that collection. 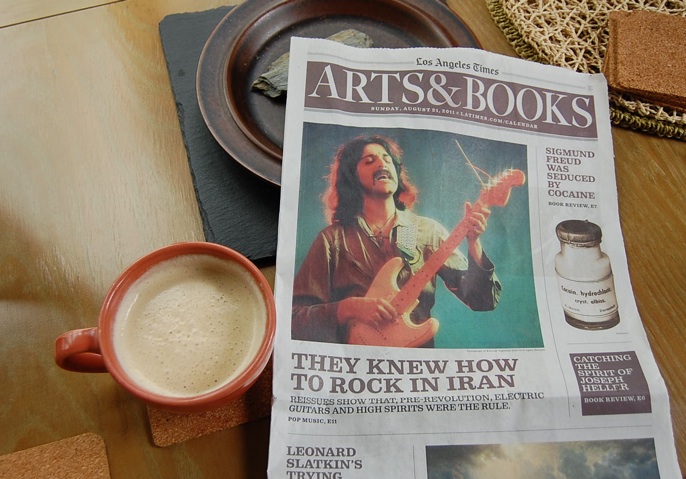 Sundays at Now-Again are usually leisurely affairs: after brewing up some of Intelligentsia’s finest “in-season” coffee, we throw on a record from some complementary place in the world and revel in the glory of it all. This Sunday, of course, was a bit different: our home-city’s biggest daily, the Los Angeles Times, ran a huge story on our Kourosh Back From The Brink anthology on the front page of their “Arts” section. The coffee just had to wait until we’d plumbed the depths of Jessica Hundley’s piece. An excerpt:

” ‘One of my father’s most important goals has been making the connection between Persian and international music through the modernizing the Persian music,” says Kourosh’s son Kaveh, a musician in Vancouver, Canada. “Releasing of ‘Back From the Brink,’ on a non-Iranian label, and appreciating his efforts in music after three decades, is not only important for Kourosh himself, but it is very precious for any artist who is moving forward today. There is no doubt that this gives us all this hope that the sun is not going to stay behind the clouds forever.’ ”

If you didn’t know, all three formats of our anthology – 2CD, 3LP and 4 x 7″ box set – are in stock and shipping at Rappcats webstore, and everywhere good music is sold.

It might be difficult to imagine today, but there was a moment in the pre-Khomeini Iran of the mid-1970s when miniskirts and rock music reigned, where a female pop balladeer wowed crowds of thousands and a man named Kourosh became a guitar hero on a par with Jimi Hendrix and Jimmy Page.

Since the Iranian revolution in 1979 and the subsequent censorship of many of the country’s artists, Iran’s pop cultural past has taken on a dream-like quality — more than 30 years of constricting government bans having had a dramatic effect on the country’s creative output.

Though a vital rock ‘n’ roll and artistic underground exists in today’s Tehran, there are still heavy prices to pay for shredding on a Stratocaster. An artist can be arrested for performing music not in line with traditional Persian song structure, and women are no longer allowed to sing alone — all females voices relegated solely to the choir.

The sobering situation for contemporary Iranian musicians is partly what makes two new rereleases from two L.A.-based labels so revelatory.

Highland Park’s Now Again label has compiled “Back From the Brink: Pre-Revolution Psychedelic Rock From Iran: 1973-1979,” one of the most cohesive compilations from Iran’s own guitar hero, Kourosh Yaghmaei. And L.A./U.K.-based label BMusic/Finders Keepers has presented a similar homage to the lost singles and B-sides of Iran’s biggest female pop star, Googoosh, with the self-titled “Googoosh.” Both albums are striking examples of a culture exuberant and exploratory — a moment in Iran where East met West — and produced some stunning, cathartic and intensely moving results.

Iranian expat Dario Margeli runs Irannostalgia.com, a website devoted to Iranian pop culture, from his adopted home in Spain. “One of the most interesting things about hearing this music today,” he says, “is that it’s so well produced. This reflects the government’s support of artists and of the wealth that was available to many in the 1970s in Tehran. People were relaxed enough to experiment, to try things, to be rebellious.”

That rebellion comes through in Kourosh’s sprawling guitar-driven experiments and in Googoosh’s uninhibited vocal exploration.

“After the revolution Googoosh stayed in Iran and did not perform again until 2000, when she moved Los Angeles,” says BMusic’s Mahssa Taghinia, herself an Angeleno of Persian descent. “Today she’s a national treasure amongst Iranians, the most well-known Iranian pop star. Her voice is a direct link to the past, to an era in Iran where artists were directly reflecting the Shah’s ideology of rapid Westernization. She combined romantic Persian poetic verse with the underground funk and psychedelic phenomena of the ’60s and ’70s.”

Kourosh did the same, in his own way. In the liner notes of “Back From the Brink,” he cites the Ventures, the Beatles, the Rolling Stones and Bob Dylan as his primary inspirations. Working, like Googoosh, from traditional Persian influences, Kourosh developed a unique crossbreed, mixing the classical sounds of his early musical training (he first learned to play on the santur, an Iranian version of a violin) with thoroughly Western instrumentation. He and his band embraced bass, electric guitar and a propulsive rock ‘n’ roll drumming and the result was music that captured a vibrantly expressive era.

“Kourosh’s image always carrying an electric guitar was the equivalent for Iranians to the image of Jimi Hendrix for Western kids,” Margeli says. “Kourosh was the poster guy in the 1970s for many who were preoccupied with ideologies coming from the Vietnam War via U.S. films, Che Guevara, post-hippie movement, ‘Jesus Christ Superstar’ and such. He experimented with Persian musical scales within the context of rock music, he achieved elegant results and he made the whole thing look cool.”

Whereas Kourosh represented (more than any other Iranian musician of the era), the bearded and swaggering rock god, Googoosh was the poetic songstress, raven-haired and lovely, creating sprawling, romantic ballads — music that went straight to the heart.

“In a lot of ways her soaring, unrequited love songs are uncanny premonitions of the country’s impending cultural heartbreak,” says BMusic’s Taghinia, “so, in a sense, this release is part memoir, part romantic nostalgia. Googoosh is the siren of that era and important in that she’s really a direct link to Iran’s past.”

Both artists continue to perform. Kourosh, 65, remains in Tehran and works within the confines of governmental restrictions. Googoosh, who is 60, played at the Nokia Theatre in L.A. last April to a sell-out crowd and spent this summer touring Istanbul and Monte Carlo. For expat Iranians, particularly women, Googoosh remains hugely significant.

“When Khomeini took power in Iran in 1979 he prohibited pop music altogether,” Margeli says. “This is less harsh now, as they have allowed men to sing, but it has been a complete catastrophe for the Persians in general, and permanent damage has been done because the mullahs have prohibited women from recording and performing in public unless they do so in a choir. Imagine what this does to the population of a country where 50% are women, but for 30 years they have not been allowed to have a female pop star?”

Men in Iran record under heavy censorship. Kourosh now runs a private music school and studio in Tehran, but in “Back to the Brink’s” liner notes, he laments his country’s creative state.

“Can you imagine what it is like to be accused as ‘guilty’ for what was, until this very recent time, considered a respectful art?” he writes, “Some of the artists, masters and musicians who stayed in the country only due to their nationalist ideologies, suffered early deaths or faced a very sad destiny: most of those that survived where deeply depressed. Even a pet bird must fly, as to not to forget how to fly.”

The music made by these two artists is a poignant reminder that creativity is fueled, most of all, by freedom — by open minds and open societies.

“One of my father’s most important goals has been making the connection between Persian and international music through the modernizing the Persian music,” says Kourosh’s son Kaveh, a musician in Vancouver, Canada. “Releasing of ‘Back From the Brink,’ on a non-Iranian label, and appreciating his efforts in music after three decades, is not only important for Kourosh himself, but it is very precious for any artist who is moving forward today. There is no doubt that this gives us all this hope that the sun is not going to stay behind the clouds forever.” 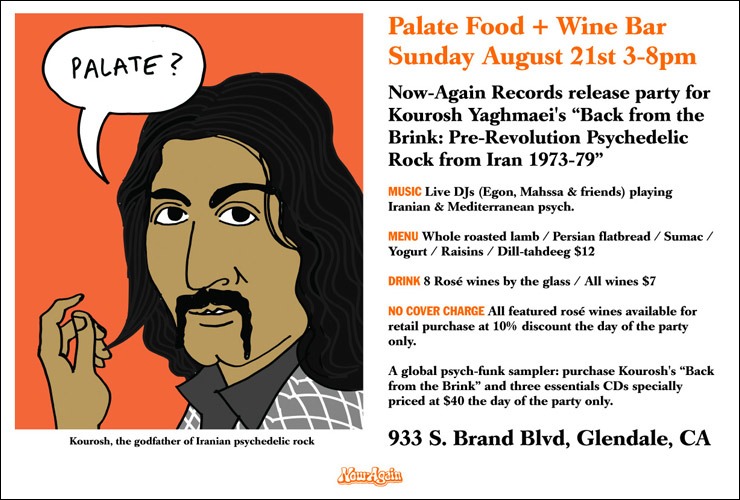 We’re following up June’s True Soul party with a special one for Kourosh’s Back From The Brink anthology: On Sunday, August 21st, from 3 until 8 pm, Egon, Finders Keepers’ Mahssa and friends will be playing nothing but Iranian and Mediterranean psych grooves as the Palate folks roast an entire lamb, serve up Iranian specialties and pour rosé wine specials….

We’re going to be selling our Back From The Brink album and we’ll have a small number of a $40/4 CD “Psych Funk Sampler” for sale. 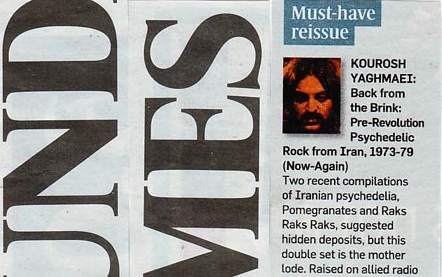 Little more than a week after highlighting our True Soul: Deep Sounds From The Left Of Stax anthologies as “Must Have Reissues,” The Sunday Times has done the same for Kourosh: Back From The Brink. An excerpt from the review:

If you didn’t know, both the 2CD and 3LP volumes are in stock and shipping at Stones Throw’s webstore, and our 4 x 7″ box set will be available everywhere good music is sold on Back From The Brink‘s official release date of August 23rd… next Tuesday!