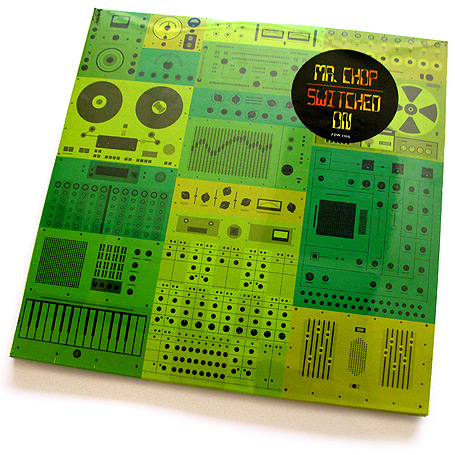 We’re pleased to present – in association with Five Day Weekend – Mr. Chops’s Switched On over the course of a 9” single and a 2×10” LP. By now you know all about the man – but, in case you need a primer: Chop is a producer, engineer, multi-instrumentalist and the proprietor of Cheshire, UK based Ape Recording Studios, one of the finest analog studios in the world…. and a repository for vintage synthesizers, guitars, drums and gear sourced from the world over.

Thus, Switched On is a natural album: Chop’s homage to the great Moog-lead albums that proliferated in the wake of the synthesizer’s invention in the late 60s and early 70s. Unlike those records – like Dick Hyman’s Age of Electronicus, which contained one great synth-funk track amidst a series of soft pop hits – this album is all killer, and no filler. Mr. Chop tackles songs by the likes of Can, the JBs, Jimi Hendrix and Jimmy Smith via a still-futuristic blend of heavy drums by The Heliocentrics’ Malcolm Catto and his own fuzzy guitars and cosmic keys.